This article was a sponsored advertorial in partnership with San Sebastian Urban Adventures. All views are my own.

“For Basque people, a typical trait that we’re teased for, is that we’re always thinking and talking about food.”

And that was the first introduction to Basque culture that I received from two friends in Vitoria. But it was in the much more popular holiday retreat of San Sebastian (Donostia in Basque) on the Basque country’s Atlantic coast, in Northern Spain, that I really understood what they were getting at. I’d decided to look for a food tour of the city, to find out what it was about Basque cuisine that was worth obsessing about, and what I found was a Pintxos tour. Before I went, all I knew was that Pintxos, pronounced ‘Pin-chos’, were the Basque version of Spanish tapas. But that, I discovered, didn’t nearly do them justice, as Pintxos are in fact an indistinguishable part of San Sebastian’s history and even current way of life.

The family run business of San Sebastian Urban Adventures, was the company I booked with, and Amaia, who is Basque herself, was our host. As she met us at the historic gate into the Old Town, the introduction she gave to me and the other two members of the tour, Ineke and Hans, explained how what we had in store, was much more than just getting a bite to eat.

Napoleon, The Duke of Wellington And A City Reborn

Over the next three hours, we learnt how the city’s destruction at the hand of victorious English-led forces during the Napoleonic Wars, had actually helped lead to the creation of Pintxos. the miniature dishes that are now presented in restaurants in cities across the Basque country. The Duke of Wellington’s marauding troops burnt down almost all of the old town on August 31st 1813, (which is still commemorated every year) meaning that the fishing town had to be rebuilt, and this time, to more expensive tastes.

Towards the end of the 19th century, Spanish Queen Maria Cristina began to take an interest in the seaside town as a summer residence and place to take refuge from the heat of Southern Spain. A palace was built and with the Queen’s patronage came the interest of the Spanish aristocracy and well-to-do whom followed suit. As a result, the town adapted to accommodate their needs for more up-market hotels and places to eat. However, this was bad news for some of the locals, who were being priced out of their own town. Fortunately though, some bars and restaurants were able to entice the locals back into eating out by offering smaller dishes that were cheaper than the full meals the pricier restaurants, catering to Madrid’s rich, were offering. Originally, many of these mini snacks had a “pintxo” or spike though them, and so Pintxos were created.

Above, is one of the five Pintxos that Amaia ordered for us. Sold in San Sebastian’s local market, El Mercado de la Bretxa, the mix of olives, anchovies and chili peppers is one of the oldest known versions of Pintxos. However, these days, Pintxos are usually bigger, cooked dishes that are much more sophisticated. 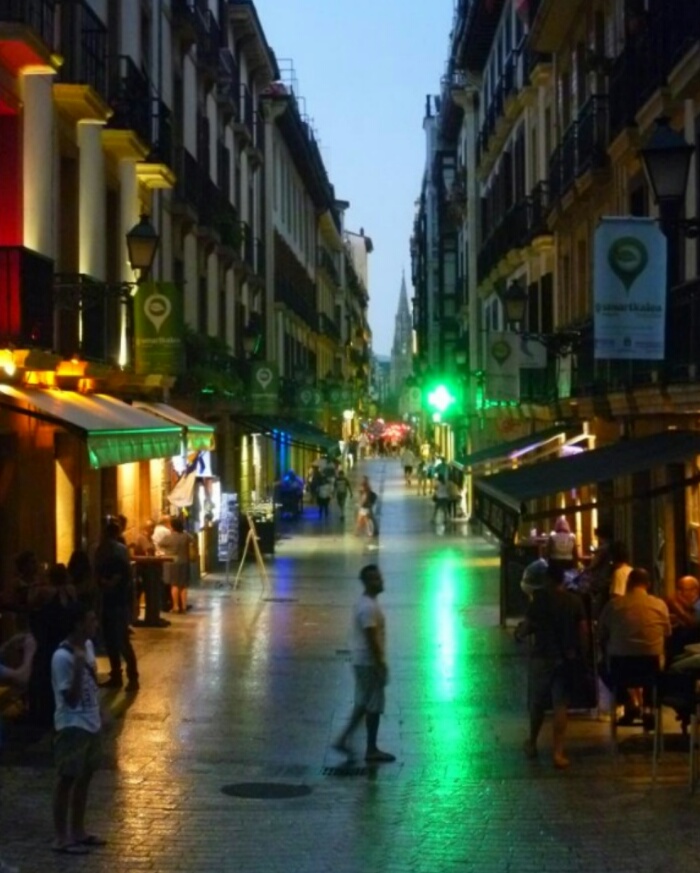 And for our tour, a walk though San Sebastian’s Old Town, was where we started to discover just how far Pintxos have come. Very popular with tourists and locals alike, the Old Quarter was very busy, despite it being a rainy Tuesday. Stepping in from the brief downpour into the warmth of a low-lit bar, Amaia showed us to a corner side table, and went to order our first Pintxos of the evening. It was just after 8pm, which apparently, was a great time to sample Pintxos.

Top tip 1
The main chefs, many of them trained in Michelin Star restaurants, usually come to work for lunch around 1-pm, and for dinner, after 8pm. And so those are the times to find the tastiest food on offer, because otherwise, what’s being served is not usually the best that the bar or restaurant is capable of.

Thanks to the fact that we were such a small tour group of only three, despite the bar being full of people, we didn’t have the uncomfortable feeling of being crammed in, which you get with so many other tours out there. It was such a refreshing change from the norm where you see hoardes of tourists following a guide like sheep. Instead, I felt like me, Hans and Ineke enjoyed a much more personal experience. (Amaia later told us that San Sebastian Urban Adventures has a maximum limit of 12 people per tour, and that usually groups are smaller than this still.) 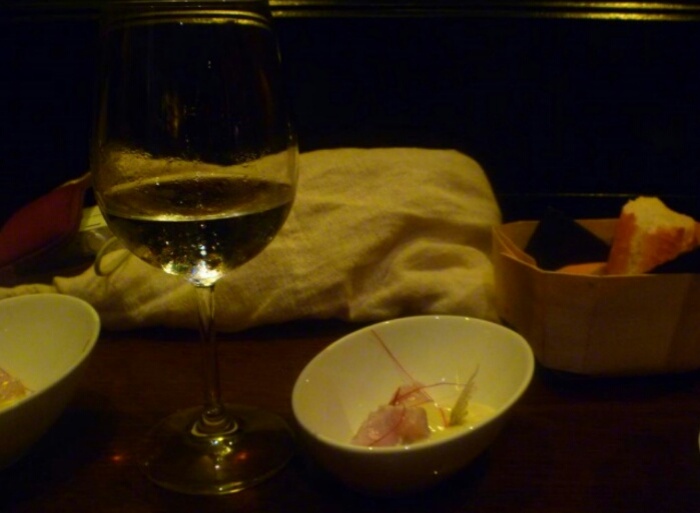 First up of the night, was very gently cooked Mackerel meat and a crispy Mackerel fin served in an airy, almost mouse-like garlic cream, with a small basket of bread on the side (many Pintxos come with bread). I’ve never been a fan of Mackerel before, it usually has a much too strong ‘fishy’ taste, but this was nothing like I expected. The taste of the fish was actually quite delicate, and the cream surrounding it was very-garlicky and so delicious. Served with it, was a glass of young white wine, only a year old, called Txikito. Tasting quite fresh and floral, but not too dry, Txikito, we were told, is very popular in the Basque country, particularly as an accompaniment to Pintxos.

From Old to New

Once the rain had abated, hungry for more, Amaia then led us through the Old Town, into Constitution Square, where they used to hold the bull fights, and into the local market. Unfortunately, it was closed, but that is where Amaia introduced us to the first ever Pintxos, the mix of olives, anchovies and chili peppers I already mentioned, which she had bought earlier. She pointed out a good day-time bar for Pintxos in the middle of the market itself, and then we moved into the new part of the city. Not far away from the beach and river, came our next stop. Quite different from the first bar, the second was not as crowded, certainly there were fewer tourists, and more brightly-lit, revealing that there was also a wider selection of Pintxos on offer.

Top Tip 2
However, don’t be fooled if you go in somewhere and there aren’t any, or only a few Pintxos on show at the bar. Amaia explained that in many places you have to order from a chalked menu on the wall. This can be more difficult if a) you can’t speak Spanish or Basque or b) you have no idea what makes a good Pintxo in the first place. So, if you’re in San Sebastian for more than a night, I’d recommend doing a tour or meeting some locals or friends who know San Sebastian on the first night, and then that way, you’ll know all the Pintxo-picking tips and best bars to have them in for the rest of your stay.

Back to the second bar, what arrived was beef cheek served in quite a spicy confit (gravy to you and me). Again, there was a basket of bread, and this time, a glass of young red wine. The beef itself was really something, probably my favourite dish of the evening. The meat was very soft and succulent, and the sauce was so, so good – hot from some sort of chili, but not too hot at all. In fact, Amaia explained that a general principle of Basque cooking is not to use too many additional herbs but to rely on the natural flavours of the food.

I was quite reluctant to leave, I’d have been happy with another serving of the beef cheek, and there were several other interesting looking Pintxos on display, yet, on we went.

More seafood and some Basque cider 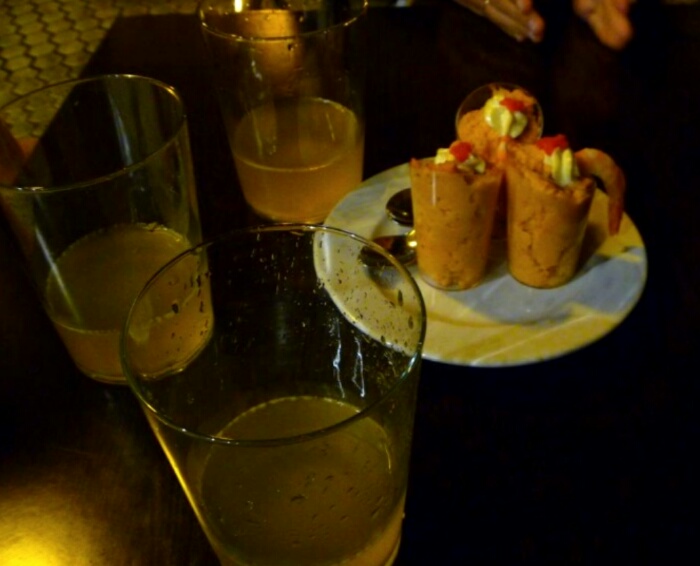 For our final stop on what was turning into one of the best tours I’ve been on, Amaia took us even further away from the bright lights of the beach-side promenade and tourist shops. Through residential streets and past some gorgeous, old, French-style, 19th century apartment buildings, we came to the final bar, apparently a favourite amongst San Sebastian’s locals. Bigger than the previous two, we joined several others seated outside underneath a large canopy, and as before, Amaia went off to the bar to order for us. Not long later, arrived two types of Pintxos: the first a mix of spider crab and cream with a King Prawn, and after, a delicious mix of bread, squid and lovely caramelised onions.

This time though, were offered a glass of Basque-style cider, that is, that it wasn’t carbonated. The taste was much more acidic than any cider I’ve ever had, and I’d say that honestly, it’s probably an acquired taste, but it’s very common across the Basque country, so if you’re there, you’ll probably try it at one time or other. Amaia recommends from January to April as the best time to taste Basque cider, as this is when it’s fresh and can be served straight from the barrels. After April it has to be bottled.

And so, three hours, five Pintxos, two glasses of wine, one glass of cider, and an insightful history walking tour later, I said goodbye to Ineke, Hans and to Amaia. For anyone who is considering visiting the Basque Country, go to San Sebastian and check out San Sebastian Urban Adventures. Yes, this is a sponsored post, but really, I thoroughly enjoyed being led through San Sebastian’s past and present by Amaia. If you do book with them, it’ll be either Amaia or her husband Tomasz who will be leading you too. I can only speak for Amaia, and say that she was such an engaging host, being both kind and very knowledgeable about her home. I felt like I learned so much about San Sebastian and Basque people in such a short space of time, which I really loved and will remember.

At €50, it’s not a budget option, which is usually a priority for me, yet if you’re able to treat yourself to a great insight into Basque life, then I’d say, enjoy! Also, if you have a big appetite, bear in mind that the tour I went on was a tasting tour, so five small dishes might not amount to a full meal for you. Personally, I didn’t need to eat more afterwards, but I know that some people might.

This review was a sponsored post, but everything I’ve written are my own genuine opinions