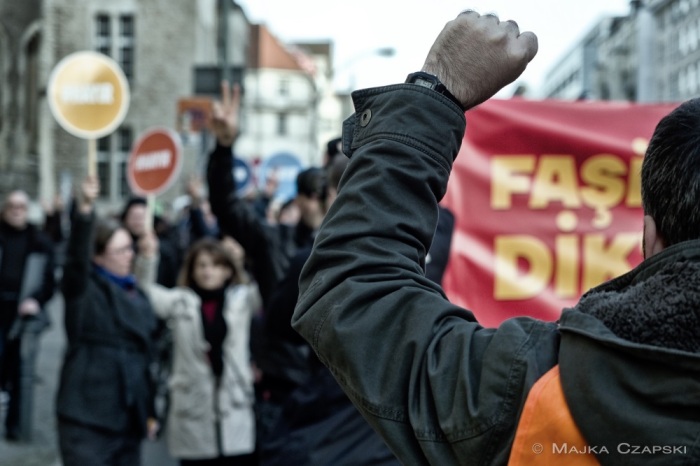 As a swirl of jibes continues to raise the hackles of both Turkish and European officials across Europe and Turkey, the UK stands as an outlier. Diplomatic relations – at least publicly – have been cordial.

A new report by the UK Foreign Affairs Select Committee is calling on the government to strengthen ties with Turkey even further, specifically due to the UK’s impending exit from the European Union — and the subsequent need for the UK to renegotiate trade deals with partners.

“Both the UK and Turkish governments currently regard the UK’s withdrawal from the European Union as being both an opportunity and incentive to strengthen their bilateral relationship, through the enhancement of trade, defence, and security ties,” said Sir Alan Duncan, minister for Europe and the Americas at the Foreign and Commonwealth Office.

Speaking in January 2017, Sir Alan noted that much of the reaction from the EU to the July 15, 2016 failed coup attempt — aimed at overthrowing the democratically elected President Recep Tayyip Erdogan — has been critical.

There has been insufficient understanding in many quarters, particularly within the membership of the European Union, about what Turkey had to face and still faces. What was important with the Turks was to ask the questions and understand first, before criticizing later. The EU was overcritical too quickly.

The tone of the committee’s report is in stark contrast to the public dismay expressed by EU officials, many of whom have been condemnatory of the post-coup crackdown initiated by President Erdogan.

Indeed, the report notes that “the understanding that the UK has shown to Turkey is almost unique. The UK empathizes before it criticizes.”

However, the measures taken by the Erdogan government in the aftermath of last year’s unrest have been severe.

More than 140,000 people have been suspended, dismissed or arrested from all branches of the military and from within the media.

In March 2017, Danish Prime Minister Lars Lokke Rasmussen became the latest European leader to publicly pressure Turkey to cease cracking down on dissent, adding that he was concerned “democratic principles are under great pressure” in Turkey.

However, the UK government continues to be wary of joining the chorus of overtly critical voices.

“It would be naive to assume that any country would go through a coup such as the one Turkey went through and not see significant changes made in order to protect its democracy and the rule of law. The UK is right to support Turkey’s defence of itself against future threats from coups and terrorism. However, Turkey must demonstrate its commitment to upholding its international legal obligations during its response to these threats, and the UK has an important role to play in ensuring Turkey’s compliance.”

The role of the Gulenist movement — so-called after the US-based cleric Fethullah Gulen — which President Erdogan blames as being behind the bloody 2016 coup, was also explored.

Gulen’s supporters say that they are a peaceful community based around spirituality, following the teachings of imam Gulen.

On March 18, a German intelligence report seemed to back the Gulenists by suggesting that Fethullah Gulen was not the mastermind of the Turkish coup attempt.

However, the Foreign Affairs Select Committee heard evidence that was more circumspect.

“The explanations provided to us by the Gulenists did not resolve our uncertainties about the fundamental nature and motives of their movement…A lack of transparency pervades some of the core activities of the Gulenists, making it impossible for us to confirm that all of these activities are purely philanthropic.”

Professor William Hale, Emeritus Professor at the School of African and Oriental Studies in London, noted that a re-set was necessary, post Brexit:

“The British government is attempting to develop its relations with Turkey, but in opting to leave the EU it has lost its main negotiating card”.

Evidence of a re-engagement with Turkey in the aftermath of the June 2016 Brexit referendum has already been much vaunted by the British government.

Indeed, in January 2017, Theresa May became the first western leader to visit Turkish President Erdogan since the failed military coup of July 2016, agreeing to further collaborate with the Turkish strongman to help defeat terrorism.

Calling Turkey one of the UK’s “oldest friends” May announced that Britain had agreed a €115m defence deal to help develop fighter jets for the Turkish air force.

PM: This is more than a trade deal with Turkey – it is the start of a deep defence partnership that will contribute to our overall security. pic.twitter.com/X0GP1Gjb8p

For his part, Mr Erdogan announced that Turkey aimed to increase trade with the UK to US$20bn a year from US$15.6bn.

The real strength of any UK Turkey trade relationship will not become clear until the UK has been able to disentangle for the EU, through Brexit negotiations.

The first step towards that goal begins next week, when Prime Minister May is finally expected to trigger Article 50 — the formal apparatus to start Brexit negotiations — on Wednesday, March 29 2017.